We use cookies on our website to give you the best service possible. By using our services, you agree to our use of cookies.
< Back
Journal/Transparency in Sustainability 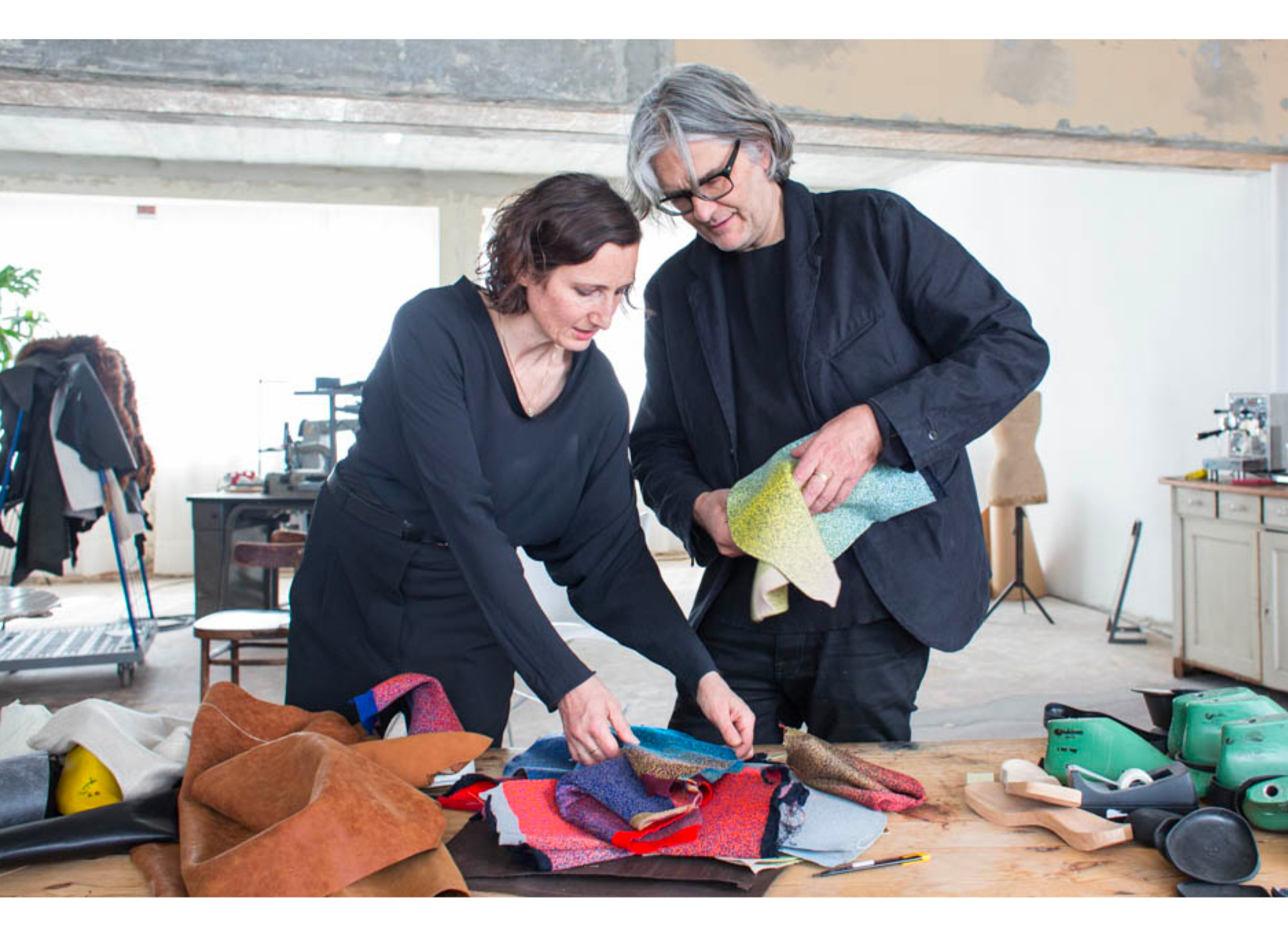 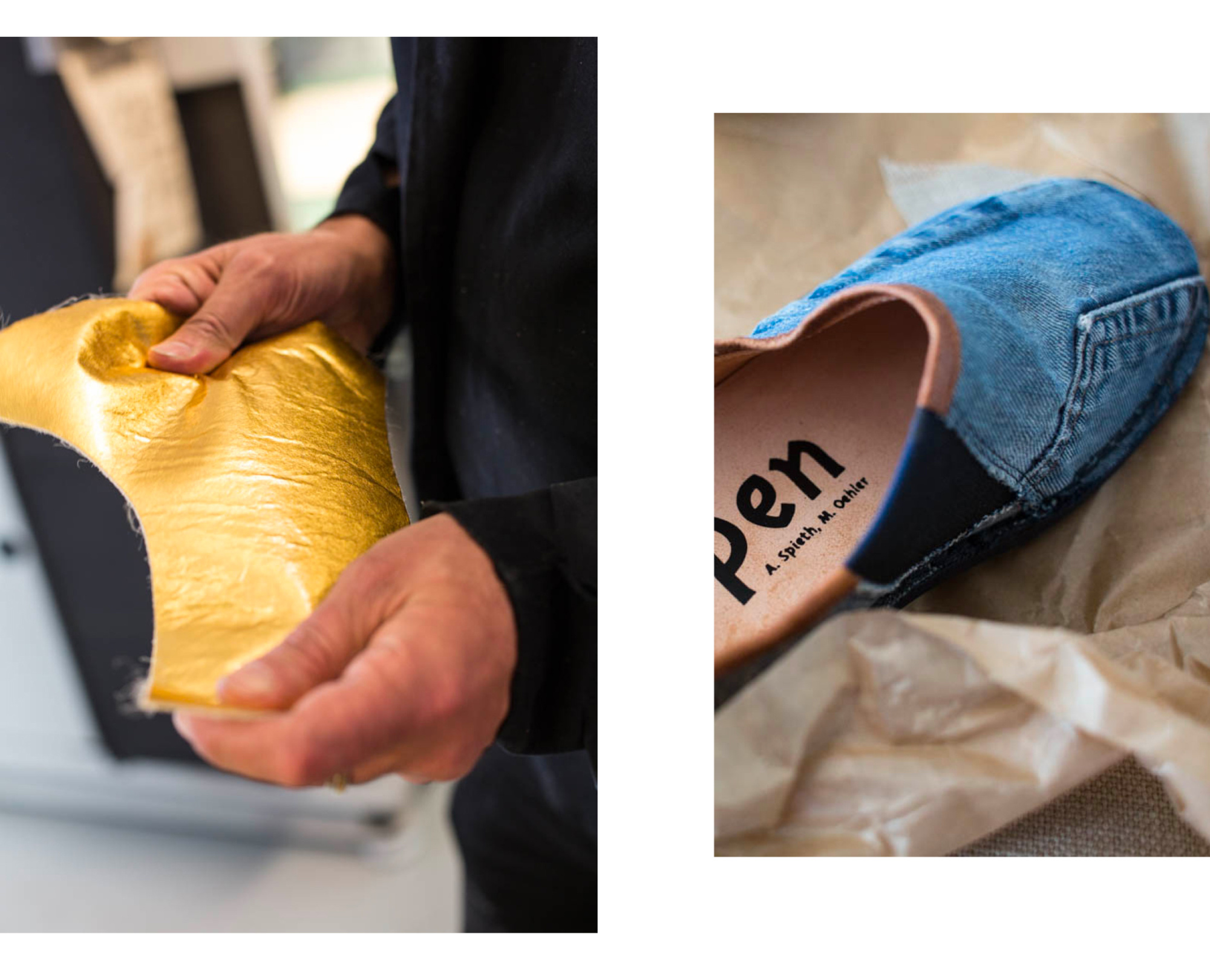 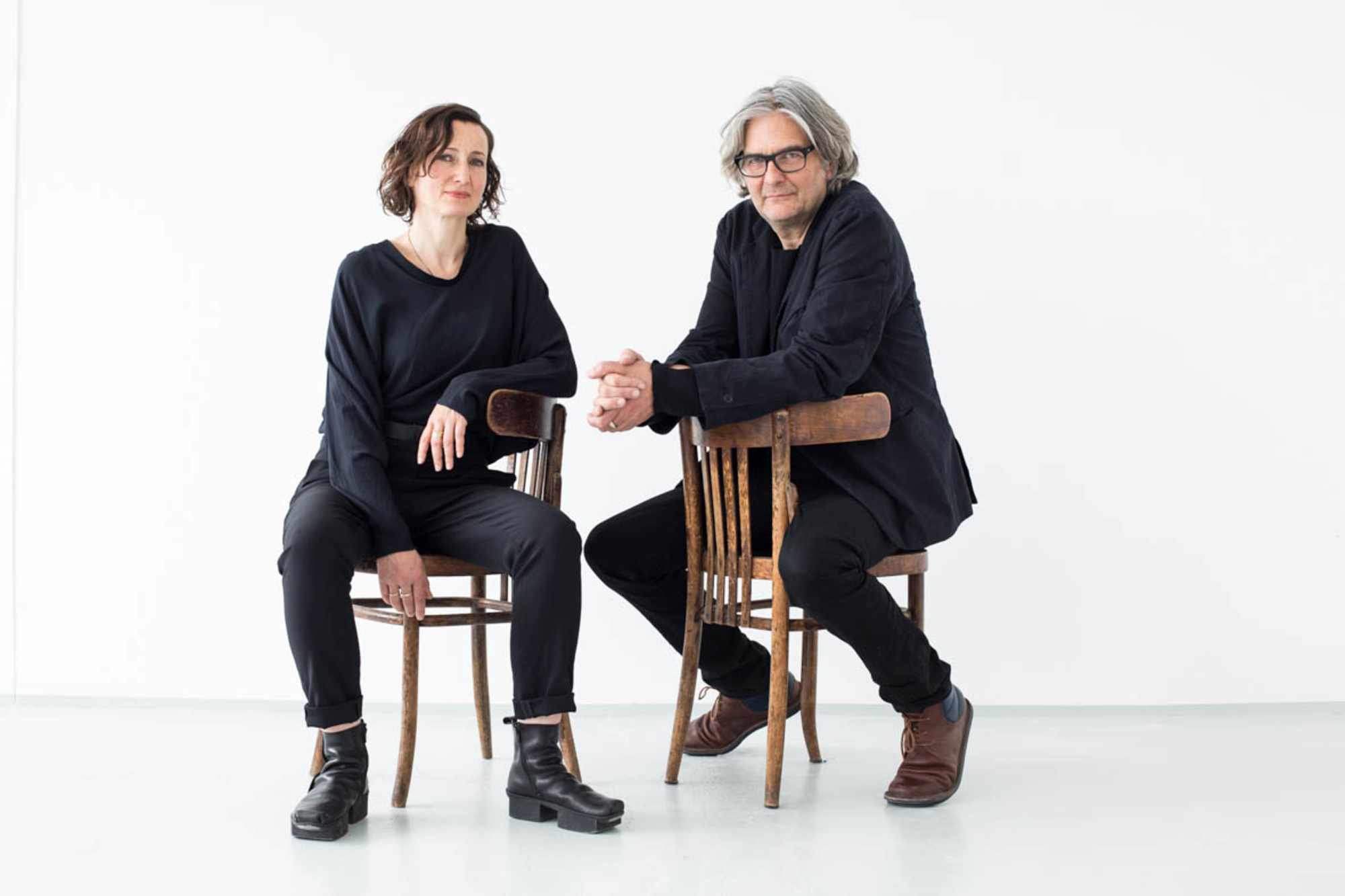 Trippen was born during the sustainability movement of the early nineties, and continues its innovative journey still today. One of the steps that Trippen has just introduced is to bring more transparency to their development process, with symbols to explain the sustainability credentials of every shoe. A conversation with co-founder and designer Michael Oehler and designer Claudia Hoess about the story behind their journey in creating sustainable shoes.

Michael, when you started the company with Angela Spieth in early nineties, what was the idea behind making the first pairs of Trippen shoes?
Michael: When we started the brand in 1991, we created our prototypes with the idea of avoiding the use of any glue. Everything was joined together mechanically. We came to realise that this wasn’t a practical solution – it required a lot of maintenance and ultimately couldn’t enter the market. Nevertheless, it was an important step that brought us closer to our initial idea later on. Footwear between mass-market and high fashion wasn’t offering many exciting possibilities at that time, and we always wanted to make shoes that look different.


What is your main goal in making shoes?
Michael: Generally, the most important values are design, ecology, social responsibility and our customer. Our goal is to negotiate between these four equally strong pillars of our brand to develop better shoes.

Claudia, could you tell us a bit about your role at Trippen?
Claudia: I came to Trippen not long after the company’s beginning in 1995, when I was learning how to make shoes with Michael. Step-by-step, I got more involved. Nowadays working closely together with Michael to develop new ideas. We complement each other, it’s a very fluid process. Usually, Michael comes up with all the sustainable, environmentally-conscious and functional improvements, and then we work on the design which reflects that, or in other words: design follows function.

Tell us something about the process of balancing those four pillars.
Claudia: I remember when Michael wanted to use water-based glue, but the people producing it refused to use it because they feared it would slow down their work. Water-based glue takes longer to dry, about 10-15 minutes. Michael convinced one woman to try and work with water-based glue for two months so she could experience the pace of working with it, and inspire others to try and adapt to this new approach. Now we use almost exclusively use water-based glue that is much less harmful to the environment.

What led you to implement sustainable symbols?
Claudia: From the very beginning, we always believed that the design of our shoes should visually communicate many of the sustainable aspects. Nowadays, I think it’s time to make it more intuitive, with the help of symbols. I feel that – especially on the Internet – people are taking less and less time to learn about the products they purchase, therefore, we need to communicate their value in other ways, too.

Michael: The symbols are quite accurate, I would say. They bring us closer to the process – it's not just about a black and white definition of what we do, but rather a more detailed and honest way of communicating where we are right now with our journey in creating shoes that are better for the environment, better for us and better for our customers.

"The symbols are quite accurate, I would say. They bring us closer to the process – it's not just about a black and white definition of what we do, but rather a more detailed and honest way of communicating where we are right now."

Let’s talk about some of the symbols. We already mentioned the water-based glue, what about the chrome tanned leather?
Michael: This, like most of the improvements, comes from a negative experience. Before Trippen I worked at an orthopedic shoe company and they had a very small room where I worked with chrome-tanned leather, and I remember how I used to get a rash on my skin from it. That's also the reason for which I insisted on having a huge airy space in our production, with different air conditioning for cleaning the air from any pollution.

Claudia: Our leather, which is not chrome-tanned or covered, has an open surface and comes in with occasional scratches and defects from the animal. That means the pattern cutters in our production have to avoid those scratches, what takes them more time and the process can’t be automatised. Nevertheless, it is better for the workers as well for the feet of our customers and finally, it ages more beautifully.

What can you tell about vegetable tanning?
Michael: The process of vegetable tanning leather takes much longer than the chrome-based technique, but has many benefits in terms of comfort, sustainability and, of course, its environmental impact. One of the design challenges is that vegetable tanned leathers are difficult to produce. We can’t use heat and humidity in the same way that we could with chrome leather. Instead we have to find more solutions in our pattern making.

What are your experiences with new nature-based alternatives for leather, such as pineapple leather?
Michael: We’ve gotten hands-on with many kinds of vegan leathers but it doesn’t age nicely, neither does it last long. I have the feeling that it’s a replica of leather and unfortunately it feels like that. I would prefer to use linen or other traditional materials for vegan shoes.

You’re working intensively on the development of vegan shoes. Could you give us some insights into this process?
Michael: The vegan shoe has a completely different approach. It feels strange to me because I have to change my thinking from not using leather and rubber. So far I have been designing in a way that pays a lot of attention to durability considerations. This is more like creating a holy shoe, where I focus only on using vegan or biodegradable materials and compromise on other things. For a couple of years now, we've follow every development, and have tested them all with our shoes. For the soles, we made a step back to natural crepe, although rubber is stronger and easier to replace. We are making progress on this journey, and will present some ideas in the upcoming summer collection.

"The vegan shoe has a completely different approach. It feels strange to me because I have to change my thinking from not using leather and rubber. So far I have been designing in a way that pays a lot of attention to durability considerations. This is more like creating a holy shoe, where I focus only on using vegan materials."

As we’ve already mentioned natural rubber, could you speak to that too?
Claudia: The natural crepe gets very soft in warm temperatures, and hardens in the cold. These characteristics bring with them a lot of production challenges that we previously experienced with our children's shoes and other sole projects. For our vegan shoe, we mentioned these experiences and tried to avoid these difficulties by working out a very basic design.

Repairing has been always an important part of Trippen. How many Trippen shoes do you roughly repair per year?
Claudia: While designing, we always respect this issue. One repair workshop is at our production facility in Germany and the second one is in Japan. Between them, they resole around 6000 pairs of Trippen shoes a year.

Michael: Recently we received a letter from one of our customers who sent his 15-year-old shoes to be repaired for the fourth time. In the letter he expressed how much he still loves them. As a shoemaker, I find this really satisfying.

Right from the start, Trippen aimed to be not only kind to the environment, but also socially responsible. Recently Trippen was awarded the Brandenburg Integration Award. Could you tell us about this?
Michael: When in the mid-nineties the economic boom in East Germany wasn’t developing as promised, we decided to build our production factory in Zehdenick, Brandenburg. It was an opportunity to help address unemployment in that area. While in the beginning refugees from the Balkans were part of a workshop in Kreuzberg, we later worked with former Germans from Russia who returned to Germany in the production facility in Zehdenick. These days ,we are doing our best to integrate refugees coming from Afghanistan, Somalia and Syria. I remember being told that we should expect trouble from right wingers. This threat proved a challenge and inspiration. Football in the lunch breaks helped the long levelling process, with recognition and respect literally being won on the playing field.

Read more about the symbols here